The first Cha Han I ever had was on my first trip to London more than 10 years ago. My Mum gave me that trip as a surprise for my 18th birthday and I was over the moon as I had wished to go to London for a long time. We had tight sightseeing schedule and were looking for some kind of healthy „fast food“ when we found Wagamama.

At that time, I had never seen a restaurant where everybody sits in line one long rather than separate tables. Soon, it was clear: Wagamama’s isn’t just about eating, it is a whole experience. The numbers and symbols on your place mat, the great variety of different people and the view into the half-open kitchen are just some of the features that make every visit exciting.

Cha Han – one of the most popular dishes at Wagamama’s

When I had my first Cha Han (it was the vegetarian Yasai Cha Han), I instantly fell in love with its earthy taste and the mix and match opportunity: the Cha Han comes with miso soup and pickles. To be honest, at first I was a bit confused and thought the waiter brought me something extra I hadn’t ordered but then I loved to mix the Yin and the Yang elements.

Whenever I get the chance to eat at Wagamama’s, I tend to struggle to try new dishes as the Cha Han is way too good.

We all know that I am not a chef, not even the greatest cook either but I’m trying. As cooking is an art, not every piece can be a master piece. Since I have a high opinion on Wagamama’s Cha Han, this cooking experiment was going to be a great challenge.

Hamburg isn’t London. Thus, we don’t have Chinatown around the corner. Luckily, I found an Asia supermarket which saved me quite some money -especially when it came to buying sake. The only downside is that the products in Asia supermarkets tend to use more preservatives and flavour enhancers.
The hardest bit was to find prawns. I am careful with fish since Fukushima. Also, I wasn’t sure about the grey prawns. However, the huge multi-pack was cheap in comparison to the other shiny packages and they all seemed to come from Bangladesh anyway.
I got the advice to defreeze the prawns inside the bag by placing them in warm water: 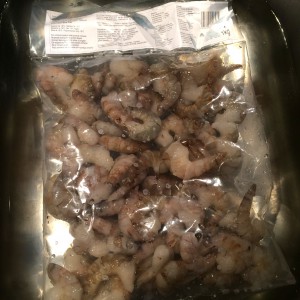 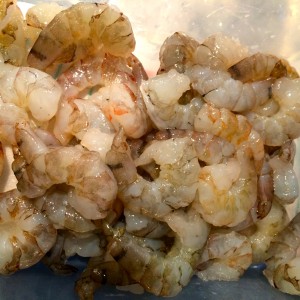 The unexperienced cook should definitely read the whole recipe before starting to cook. I cooked from Hugo Arnold’s „The Wagamama cookbook„. All recipes serve two if not stated otherwise (this wasn’t stated on the Cha Han page though). In addition: read carefully. The prawns are listed as „cooked“ -so make sure you cook them beforehand. The same holds true for the rice. Last but not least, the marinate should also be prepared in advance. If I had read the recipe some time before I actually wanted to start cooking, I would have made sure that there was enough time to marinate. Did I mention that I was supposed to marinate the chicken (which I had decided to be left out) rather than the prawns? Ooops…

Luckily, I had an experienced cook with me. She prepared her own prawn dish and showed me this incredible food hack:

How to devein prawns [GERMAN]

Yuck! So this black thing is the intestine of a prawn (never heard of deveining before) and she added that many restaurants don’t make the effort. Also, prawns with intestines often have a „nutty“ flavour. On a positive note, I was surprised that the grey prawns turned orange while frying. 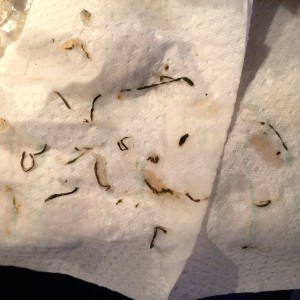 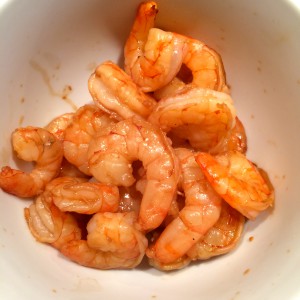 If there was one thing I had done pretty well, it was the chopping -boiling rice wasn’t too bad either. As I did not have a wok available, I had to use a frying pan. It worked fine but when I added the 2 beaten eggs, it felt like I was preparing my typical Sunday scrambled eggs (actually later someone said that my Cha Han tasted like my scrambled eggs). Probably one egg would have been better. At least the mix had a nice colour and the rice could hide a bit of the eggs. 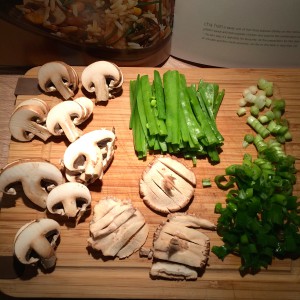 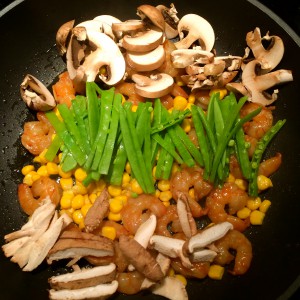 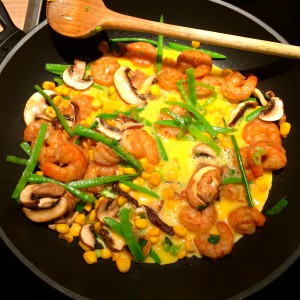 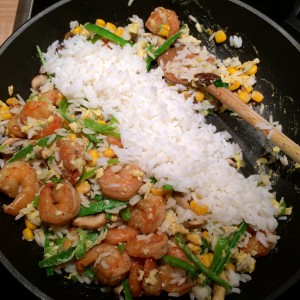 At least the rice made it a bit better. Finally, I added soy sauce and some seasoning, especially chilli to give it the extra kick (even at Wagamama’s I usually add chilli powder and oil). After all (and after about 20 minutes) the Cha Han was ready: 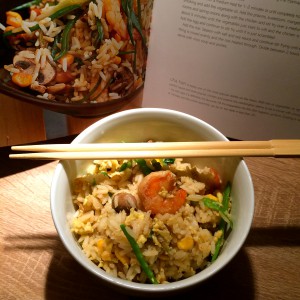 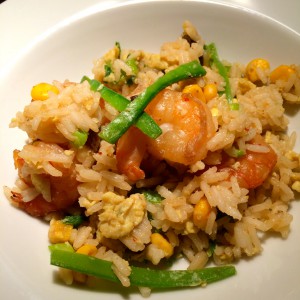 Unfortunately, I didn’t have any pickles but at least I made some miso soup. Not as described in the cookbook but from organic powder. I added wakame that I had previously soaked in water and some chopped spring onions -Hamburg style: 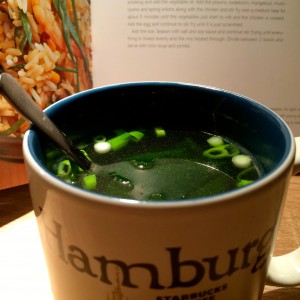 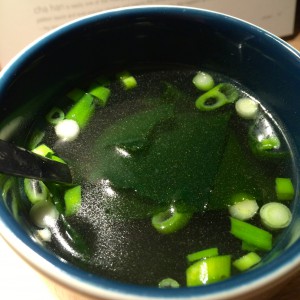 Even though the Cha Han -just like most dishes from Wagamama’s- is (said to be) pretty easy to cook, I struggled and made a couple mistakes (at least the cooking did’t take too long). The biggest mistake was probably to leave out the chicken as one of the main characteristics of the Cha Han is the combination of chicken and prawns. Next time I might actually try the vegetarian Yasai Cha Han with Tofu and I will definitely use one egg rather than 2.

After all, I love the experience at Wagamama’s. Thus, I guess it’s time for a visit soon… 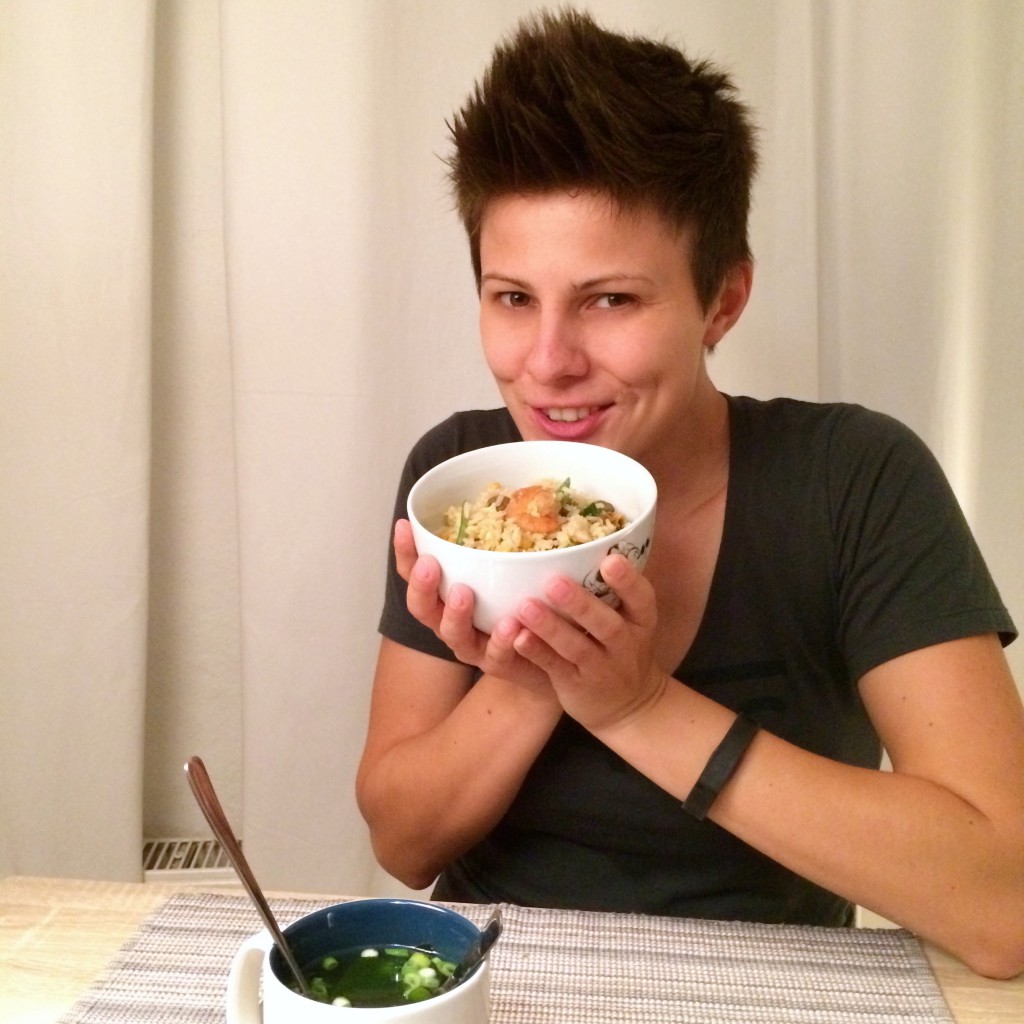